Mission begins where you are

One hundred years ago, the Pentecostal Revival sparked by a sovereign move of the Spirit of God was totally gospel-centred. There were no gimmicks. Just the raw power of God. Kensington Temple soon became the operational base of Elim?s founder George Jeffreys, as he grouped a national alliance of newly planted churches.
Elim in general and KT in particular carry the same DNA today. During the 1980s and 1990s we planted 150 churches in London in an unprecedented period of KT?s fruitfulness. About one third of these remain connected to us forming the London City Church network, an official Region of Elim?s current national structure. At the same time we work overseas touching many nations both directly and indirectly.
Over the years we have followed the mission strategies and methods of the New Testament church. 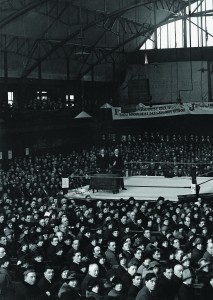 Kensington Temple as we know it today was forged in the fires of Pentecostal evangelism and church planting. During the 1920s and 1930s, George Jeffreys, Elim?s founder and pioneer evangelist, preached to large crowds across the country. Revival broke out in the depths of the devastating economic depression of that bleak period in Britain. Thousands were miraculously healed and in city after city new converts gathered into newly formed churches. The Elim Full Gospel Alliance (EFGA) was born.

The original Gentile mission was born in the ancient city of Syrian Antioch. Like London, Antioch was a multiracial world city and one of the global junctions of trade and international activity. Here God began to move upon the Gentile population with many coming to Christ. Paul and Barnabas helped form the believers and establish the church. Then the Holy Spirit spoke through local prophetic leaders and Barnabas and Paul were sent out on their apostolic mission to pioneer new centres of sending Christianity.
What is of special importance to us is the role of the Holy Spirit in mission. The missionaries were sent by the Holy Spirit and not by an organisation run by a committee. Paul was particularly careful not to operate as a loose cannon and always kept connected to the apostles and elders in Jerusalem but saw himself as being directed by the Holy Spirit, not dependent on the authority of man.

Mission is based on equipping God?s people to reach out to others. Christ?s ministry is given to the whole church ? to leaders and members alike. As his body on earth, we equip one another and function together to do his work in the world. We are a global equipping church. Each year we send out many hundreds of leaders trained through our cell programme and through the IBIOL courses.
Another important arm of mission is the television and publication ministry. Five times a day, we broadcast across the world the Sword of the Spirit teaching, which is a school of ministry in the Word and the Spirit. The books are translated into a growing number of languages and are having an effect upon Christians in many nations.

We have never been committed to planting the name of KT in the work we do overseas. Rather, we link with local leaders and help them evangelise, plant churches and grow in effectiveness. In the 1990?s we began in the Benin Republic, a small French-speaking West African nation. From there we built a relational network and saw many churches planted and unevangelised tribes come to Christ.
We now have missional networks in Brazil, Italy, Sweden, France and other countries, many of which are in Africa. As part of the Elim Pentecostal Churches of the United Kingdom, we link with Elim Global and support denominational initiatives across the world.

There is no one method of evangelism and mission that suits every situation. Paul preached in the market places, the streets, the prisons, the theatres and even the school rooms of his time. We genuinely believe that we should use any means or any method that is consistent with the nature and revelation of God.
At home this means equipping our members to be effective through cells in the market place. This is the thrust of our Tackling The Giants programme which activates and releases people from all walks of life to be effective for God where he has placed them. The worlds of Media, Arts, Politics, Law, Health and Social Care, Sports, Business and Education ? all have been touched by KT people who see their work place as their mission place.

The soul of Europe

As in the 1st Century so in the 21st Century, the battle is for the soul of the nation and of the nations. We want to continue to reach the nations further afield where the need is the greatest. People in many nations are culturally and geographically excluded from the good news about Jesus. We must reach them.
However, there is the mother of all battles taking place in our own back yard. Europe is being hijacked by atheism, secularism and false religion. Europe is our ?Macedonian? call, and we must respond. What happens in London affects Europe, first of all. That is why mission begins at home. It begins with you ? where you are.