The battle for souls

Real faith is all about engaging in the most significant battle that we can ever face, and that is the battle for souls.

Many evangelists and those who minister in the miraculous often say that the biggest miracle that they experience is not the healing of a body, but the saving of a soul.

In this battle we are facing large obstacles. First, as we see in 2 Corinthians 4:2-6 we are speaking to people who are spiritually dead and shining the light of Jesus on them, whose eyes are blinded and who will not be able to see or respond without the power of the Holy Spirit.

Praying for the unsaved consists of two main elements. First, that the messengers are correctly equipped and empowered. In Ephesians chapter 6 Paul encourages his readers to put on the armour of God. Then once you are dressed up, it is time to pray! Intercession and evangelism go together, so that when you speak the anointing on your words carries them through all the spiritual barriers. Second, as well as praying for the messengers we need to deal in the Spirit with the obstacles that are preventing people coming to Christ. This is the ‘moving mountains’ that Jesus spoke about in Mark 11:22-24, Jesus answered and said to them, “Have faith in God. For assuredly, I say to you, whoever says to this mountain, ‘Be removed and be cast into the sea,’ and does not doubt in his heart, but believes that those things he says will be done, he will have whatever he says. Therefore I say to you, whatever things you ask when you pray, believe that you receive them, and you will have them.” 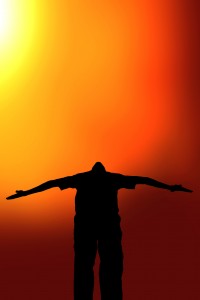 Jesus took the common Jewish phrase ‘to move a mountain’ and vested it with new power and application. In Jewish writings a great teacher, one who could satisfactorily explain difficulties in Scripture, was described as a ‘mountain-mover’. The phrase is based in Isaiah 40:1- 5 where the prophet was told to prepare the way of the Lord. Among other things, Isaiah had to knock down the mountains of difficulty which were obstructing the wide revelation of the glory of God.

This principle along with its counterpart ‘uprooting’ suggested in Lamentations 3:65-66 could be seen when an Eastern monarch wanted to travel to distant parts of his kingdom. He would send a party of men, some six months to a year in advance, to prepare the way. These men had the job of making good the bridges, repairing the roads, uprooting trees and doing everything else they could to facilitate the easy journeying and safe arrival of the monarch. John the Baptist was the preparer of the way of the Lord, but so too were the seventy-two that Jesus sent out in Luke chapter10. They went ahead of Christ in pairs to all the towns and places he was to visit. Jesus took up the idea of mountain-moving and developed it in three parallel passages: Matthew 7:20, Mark 11:22- 24 and Luke 17:5-6.

?The faith of God

?We need to be sure that we have a right understanding of Mark 11:22. Most translations suggest that Jesus said, “Have faith in God” but a more literal translation is ‘have faith of God’ or ‘have God’s faith’. We could even say, ‘have faith in God’s faith’. God’s faith is absolute. He is totally self-confident – knowing that he can achieve whatever he wants to do. Mountain-moving is not a problem to the creator of heaven and Earth. When we have a speck of God’s faith in us, warfare praying becomes straightforward. Jesus promises us that we can learn to trust in God’s faith. That way we can have the same confidence that God has in his word. The passages from Matthew and Luke mentioned above show that we do not need much faith to move mountains, we just need the genuine article – it is quality, not quantity that counts! On its own, our faith can achieve nothing – it is God who moves mountains. Our faith merely engages us with the great power of God. In 1 Corinthians 12:9 Paul promises that the Holy Spirit would give the gift of God’s faith to some people. He then went on to urge his readers to be zealous for, or to desire earnestly, the higher gifts – and faith is high on the list.

Our spiritual warfare is futile without the absolute certainty of the knowledge of God’s will. We must spend time listening to the Father and receive from him the identification of the mountains of difficulty which are the obstacles preventing God’s glory from being seen, and from the person being saved.

We need to ask the father to show us the circumstances, factors and attitudes that are preventing the work of God from developing in a person. Matthew, Mark and Luke each suggest a particular type of obstacle for removal.

Mark 11:22-24 implies that personal relationships, especially where bitterness exists, can be one barrier. Matthew 7:20 hints that difficulty in casting out demons may require this type of intercession

Luke 17:5-6, if taken with other passages about the fig/mulberry trees, suggests that those trees which look good but have no fruit are ripe candidates for uprooting. Fruitless, hypocritical Christians are often the greatest obstacle to people coming to Christ.

Mark 11:23 does not say ‘whoever prays to me’ but ‘whoever speaks to the mountain’. This prayer is addressed to the obstacle, not the Father. It is violent, Old Testament entreating intercession and is characterised by such ‘faith commands’ as, ‘be taken up’, ‘be cast into the sea’, ‘move hence’ and ‘be rooted up’ and is similar to the ‘pulling down strongholds’ that Paul writes of in 2 Corinthians 10:4. This is only strange to some people because they lack experience in the apostolic practice of uttering authoritative commands in ministry. Christians in the early church, and an increasing number today, spoke directly to the eyes, limbs, storms demons, fevers and dead bodies ‘in the name of Jesus’ and commanded them to be changed. We often cry, ‘Lord, do something’, but God whispers back ‘No, you do it’. This is the secret of the healing of Naaman, the miraculous catches of fish, the parting of the Red Sea and the temple tax paid by Peter.

?This executive authority, which Christ gave to the seventy-two in Luke 10:1-16, is ours to use today. This means in practice that, if the obstacle preventing John ‘s conversion is revealed in prayer to be a cynical workmate, it could be right to intercede as follows: ‘In the name of Jesus, I remove this obstacle preventing John from hearing the gospel.’

Any kind of ‘home produced’ faith is insufficient for this sort of prayer. God-given confidence that this will happen is needed. When the Holy Spirit gives his gifts of God’s faith, we are to accept the event as already being done.

The Greek tense used in Mark 11:23 means that we are to go on saying to the obstacle, ‘Get up and throw yourself in the sea’. It is not a one-off command. Perseverance, as with all prayer, is required.

The construction of the phrases ‘it will be done’, ‘it will move’, and ‘it will obey’ in Mark 11:23 emphasises the certainty of fulfilment. Luke 17:6 uses a Greek tense which refers to a time prior to the command, for example, ‘it would have obeyed’ and this underlines the fact that there is to be a visible result to this warfare prayer.

When we know God’s will, receive God’s faith, and continue in speaking out an authoritative order, there can be no doubt about the outcome: the highest mountain, the most deeply rooted tree and the most immovable obstacle will all have to go. The way will be made level for the glory of God to be seen!