How would you like to have been Joseph or Mary at this time? They were normal everyday people facing a potentially very embarrassing situation. It was only the visit of an angel explaining the circumstances to Joseph that convinced him that he was part of a unique event.

Knowing that it was God?s hand and his will was the only reason that Mary and Joseph could stand without shame or reproach. Others might accuse, but they knew the truth, the hand of God was at work in their lives.

So, Jesus entered humanity through controversy. Christianity is not an ideology or philosophy or lifestyle ? it is a faith that rests on the divine, supernatural intervention of God himself from the very beginning.

Jesus did not just become a man but was born with all the humanity that we have ? apart from sin.

We can read in the Gospel of John that the birth of Jesus was not the beginning of the existence of the Son. When we read John 1:1, ?In the beginning was the Word, and the Word was with God, and the Word was God? John is speaking about Jesus prior to his coming into the world. We are reminded that Jesus is the one by whom God created the world. The Son is the ?eternal uncreated one?. 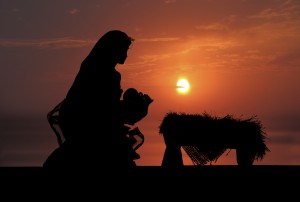 And the Word was made flesh

The time came for the Son to become a man to pay the price of the sins of the world. He would not just become a man but must be born with all the humanity that we have ? apart from sin. Jesus began his life in exactly the in the same way all people begin ? but not by human decision. God spoke his Word into the womb of Mary ? a child conceived without sin spot or blemish.

?The Father sent the Son as the ?fully- God, fully-human being? not only to reveal his divine self, but also to show humanity the ideal way to live and die.

The Father sent the Son to show us the ideal way to live and die.

Before the creation of time, space and matter, Jesus was with God and he was God. He was all-powerful, all-seeing, all-knowing, all-loving and all-present. He dwelt in perpetual glory and was all-glorious, and this visible glory was Jesus? first sacrifice.

“Let this mind be in you which was also in Christ Jesus, who, being in the form of God, did not consider it robbery to be equal with God, but made Himself of no reputation, taking the form of a bondservant, and coming in the likeness of men. And being found in appearance as a man, He humbled Himself and became obedient to the point of death, even the death of the cross.” (Philippians 2:5?8)

Philippians 2:5?8 shows that the Father did not force the Son to surrender his visible glory; he relinquished it willingly. Jesus? state was divine, yet he did not cling to his equality with God. Instead, he emptied himself by shedding every attribute which visibly expressed God?s nature.

Jesus laid aside his visible majesty and ?tabernacled? himself in human flesh. He put down his omnipotence, omnipresence and omniscience, and ?pitched his tent? in all the human weaknesses except sin.

He stepped out of the visible glory to which he was entitled and stopped looking like God. Of course, Jesus did not cease to be God because at no time did he give up his divine nature. Instead, he sacrificed the public treatment and honour due to him as God, and then he assumed the condition of a human slave and made himself as nothing in human eyes.

This self-denial was seen in Jesus? willing acceptance of life as a vulnerable foetus in a female womb, as a helpless babe in Bethlehem, as a powerless refugee in Egypt, as an illegitimate child in Nazareth, as a humble carpenter in Galilee, as a homeless wanderer throughout Israel, as a convicted criminal at Calvary, and so on.

Jesus was not forced to surrender his visible glory, he relinquished it willingly.

This was the self-denying, self-effacing way of living that Jesus freely chose, for he deliberately sacrificed his visible glory to embrace the supposedly lowest levels of humanity. And he calls us to follow him.

Because Jesus was fully God, he could have arranged things differently. He could have ?pitched his tent? in an emperor?s palace and he could have continued to radiate the visible glory of God. He could even have elevated his earthly family to a wealthy position. But, by a deliberate act of self-denial, Jesus chose to personify perfect human contentment with obscurity, powerlessness and apparent insignificance.

When John the Baptist called people to repent and to demonstrate their repentance by being baptised, Jesus joined the queue of sinners. He did not ask John to stand aside and let him take over; instead, he stood where sinners stood. Matthew 3:15 tells us how, when John protested, Jesus insisted that this was the right way to act.

Willing self-denial dominated Jesus? human life and ministry. He spent six weeks in the wilderness without food and resisted unparalleled temptations. He ministered without expecting any gratitude or earthly reward. He entrusted his money to a man who misappropriated it. He embraced lepers and befriended social outcasts. He washed feet and was repeatedly misunderstood and misrepresented.

Jesus was undoubtedly the Suffering Servant described in Isaiah 53, but few people recognised this. Pilate realised that Jesus was the real king of the Jews. A few disciples guessed that he was the Son of the living God, and most people probably thought that he was a very good man. But Jesus was not the kind of human king or perfect person that people expected or wanted.

?I was watching in the night visions, And behold, One like the Son of Man, Coming with the clouds of heaven! He came to the Ancient of Days, and they brought Him near before Him. Then to Him was given dominion and glory and a kingdom, that all peoples, nations, and languages should serve Him. His dominion is an everlasting dominion, which shall not pass away, And His kingdom the one which shall not be destroyed.? (Daniel 7:13-14)

They longed for the Ideal Man promised in Daniel 7:13?14, who would be served by people of all nations. Jesus was that ?Son of Man?, but he had come to serve and not to be served, to ask us to serve others with him rather than just to serve him with others.

Jesus was not the kind of human king or perfect person that people expected or wanted.

The perfect example of humanity demonstrated by Jesus (God?s ideal way for all people to live) is characterised by selfless, self-giving, self-sacrificing, self-denial. This reaches its fulfilment, and is revealed most clearly and completely, on the cross. It should be obvious that Jesus? willing acceptance of the cross is the natural conclusion of the way that he lived as a human.

As soon as the disciples realised that Jesus was the Christos, the ?Anointed Man? or Messiah, he explained what this meant, ?From that time Jesus began to show to His disciples that He must go to Jerusalem, and suffer many things from the elders and chief priests and scribes, and be killed, and be raised the third day? (Matthew 16:21). This was anathema to the disciples, so Peter took Jesus aside to remonstrate. He neither understood nor believed that God?s ideal way could involve suffering, rejection and death.

Jesus came to serve and to ask us to serve others with him.

But Jesus rebuked him, and then told the disciples that the divine demand for self-sacrifice applied to them too ?If anyone desires to come after Me, let him deny himself, and take up his cross, and follow Me. For whoever desires to save his life will lose it, but whoever loses his life for My sake will find it.? (Matthew 16:24-25)

As the time of Jesus? ultimate sacrifice drew near, Jesus taught his disciples more clearly about human self-sacrifice:

? He taught them that the secret of human greatness lies in service to others (Mark 10:41?45)

? He demonstrated the unpretentious peaceful nature of his rule (Matthew 21:1?11)

? He revealed the perfection of his love and instructed his disciples to follow his example (John 13:1?16).

Most important of all, Jesus taught his disciples the vital spiritual principle that willing self-sacrifice is the secret of fruitfulness. This is written deep across God?s creation: before any seed can multiply it must die and cease to be. If the seed seeks to preserve its own independent existence, it remains a single grain; but it yields a rich harvest when it dies and disappears.

Jesus took this principle and applied it to himself, ?The hour has come that the Son of Man should be glorified. Most assuredly, I say to you, unless a grain of wheat falls into the ground and dies, it remains alone; but if it dies, it produces much grain? (John 12:23-24). But he was not thinking only of himself for Jesus also expressly applied the same principle to all who would follow him, ?If anyone serves Me, let him follow Me; and where I am, there My servant will be also. If anyone serves Me, him My Father will honour? (John 12:26).

The man on the cross

Jesus? death on the cross not only revealed the full nature of God, it also provided a perfect example of God?s ideal pattern for humanity.

While he suffered, Jesus made time to demonstrate perfect human behaviour by asking God to forgive those who had tortured him, and by comforting a criminal with the promise that he would be with him in paradise. And, when he died, Jesus left everything behind, provided for his mother, and committed his spirit into God?s hands.

Jesus taught that willing self-sacrifice is the secret of fruitfulness.

Luke always draws his readers? attention to the fully-human side of Jesus. His account of the cross is shorter than the others, yet somehow conveys a remarkable intensity of anguish. Luke 22:42?44 shows Jesus enduring unparalleled spiritual agony as he wrestled with God?s will: it is the most telling New Testament insight into the humanity of the perfect Son of Man.

In the different reports of the crucifixion, it is only Luke who notes that Jesus died committing his spirit into the hands of the Father, and that Jesus continued his ministry of forgiveness right to the very end.

Luke leaves it to the other Gospel writers to reveal that Jesus? death is ?a ransom for many? and a victory over Satan. He concentrates on revealing that Jesus? death on the cross is the ultimate example of perfect human goodness.

While he suffered, Jesus made time to demonstrate perfect human behaviour.

For Luke, the cross is where the Messiah, the ?anointed man?, fulfils his Isaiah 53 destiny by accepting and enduring rejection, suffering and death. This is the Christ who calls his disciples to follow him, to follow his example, to take up their crosses (every day, according to Luke) and to share his ideal way of living and dying.