As I look back, one experience of God?s healing power stands out in my memory as the moment when God finally convinced me about his healing ministry and challenged me to partner with him. It did not take place when I was preaching to thousands in a packed and brilliantly lit auditorium, but rather when I was talking to a small handful of people in a dingy African hut.
It was September 1987 and I had seen God heal many people in the previous few years ? but mostly through other ministers and other church leaders. I was in my early thirties.
Eventually, I got up and stumbled out of the hut into the African sunlight. Where were the sick? I looked around, wondering who I was meant to heal. Just then, a messenger dashed up and started speaking rapidly in Kikuyu. I understood them to be saying that someone from the next farm was ill. Immediately, I heard the Holy Spirit speak to my heart, ?She shall be healed.?
I was stunned, but for a moment told myself, ?If it turns out to be a man, I?m going straight home!? But it was, in fact, a woman. She was five months pregnant and was miscarrying.
They needed to borrow our hired van to take her to hospital.
I ran across the fields to where I could see men carrying her, and I was convinced that she would be healed. By the time I reached the woman, I knew in my spirit what to do. I laid my hands on her, commanded healing and announced that she was healed. The farm workers ignored me and bundled her into the back of the van, with its broken suspension, and they drove off down the rocky track, bouncing about in a cloud of dust.
I learnt later that the bleeding and pain stopped ten minutes after we had prayed and that the men were rebuked by the hospital staff for wasting their time with a perfectly healthy woman. They fled from the hospital and, in true African fashion, immediately visited all their friends to tell them what had happened.
We had planned to show the Jesus film at the farm that evening, outside in the open air. Before we began, a local evangelist arrived and asked us to go with him to a group of sick people who had gathered five miles away, at the place where we had been expected that afternoon. (We had not been able to go because our van had not returned.) I told him that people were expecting to see the film, so he should bring the sick people to the farm if they wanted to be healed.
The film had already begun when these people arrived. We stopped the film for a moment, and I told those who wanted to be healed to come with us into the hut while the others stayed outside watching the film. Fifty people squashed into a mud hut which was lit by a single flickering oil lamp. They milled around and would not get into an orderly line. I felt excited and a little apprehensive. One particular woman kept on jostling the other people and bumping into them. I sensed myself becoming irritated with her and hoped that I would not have to pray for her.
A young man with a paralysed arm was the first person to be prayed for. I am not sure why, but I thumped his arm and he was instantly healed. With that, everyone in the room went quiet and still. The disorderly woman was pushed forward for prayer and I suddenly realised why she had been bumping into people: she was completely blind. I found out later that she had walked over seven miles to the meeting and now she just stood there grinning, knowing that she was going to be healed. 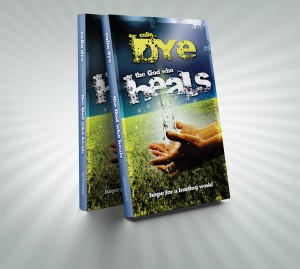 The team were also looking at me and grinning, but they were more nervous than confident. I laid my hands on her eyes and prayed every type of healing prayer I knew. When I took my hands away I asked her whether she could see.
She blinked and replied in a low voice, ?I can see.?
The interpreter asked her what she could see. She peered in the dim light, fixed her eyes on me and then cried out in Kikuyu, ?I can see a white man!?
There was almost a spiritual riot in the hut. Of the fifty sick people, all bar one deaf boy were completely healed in the next thirty minutes. We burst out of the door and stopped the film outside. Amazingly, they had just reached the point where Bartimaeus is healed. I gestured for silence and announced,
?While you have been watching actors acting, the real Jesus has been active in here.? The blind woman then told her story and showed them how she could see every one of their faces which were dimly illuminated by the single light bulb burning in the dark African night.
The people celebrated through the night. As the news spread, more and more Kenyans came running from the surrounding farms and villages. I took it in turns with the team to preach and pray for healing. When it was light, we used a nearby lake to baptise those who had given their lives to Jesus.
Without any suggestion from us, they all came up out of the water speaking in tongues! It was a taste of revival, the clearest that I had known at that point in my life.
Looking back, I wish that we had changed our plans and stayed at Nyota Farm for longer, but we stuck to our itinerary and moved on to the next rural area we were scheduled to visit. Our gracious Father went on honouring our words and answering our prayers, but nothing as dramatic as the healings in the hut occurred again that trip. All too soon it was time for us to return to cynical, sceptical London, to comfortable homes and a large, contented church surrounded by millions of hurting people living without hope.
If you want to find out more about how healing ministry works please read my new book The God Who Heals available from Amazon and other online stores.