Video appears to show Pontiff perform exorcism on wheelchair-bound boy after Sunday Mass. The Pope has been captured on film performing an apparent exorcism. Footage taken in St Peter’s Square purports to show Pope Francis carrying out a ritual to liberate a young man from demons.

The disabled man went into a frenzy of convulsions and shook, then slumped as Francis prayed over him.
The Pontiff was introduced to two men in wheelchairs after Pentecostal mass on Sunday. When a priest leaned across to tell Francis something, the Pope’s expression took on a serious tone.
Francis then took hold of the top of the man’s head firmly, pushing him down into his wheelchair. As he delivered an intense prayer, the man’s mouth dropped open and he heaved deeply half a dozen times, visibly shaking.
After the ritual Francis continued with his usual meetings with the sick who come to St Peter’s. 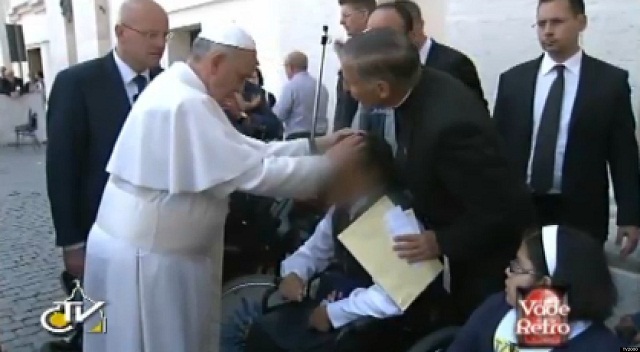 Experts said the footage broadcast on the religious satellite channel TV2000’s programme Vade Retro, shows the Pontiff reciting a prayer to drive evil spirits from the body.
The incident caused a number of media outlets to proclaim that the pope had performed an exorcism against evil spirits, though Fr. Federico Lombardi, the director of the Press Office of the Holy See, clarified in a statement on Tuesday that Pope Francis had “not intended” to perform an exorcism.
“Rather, as he frequently does with the sick and the suffering who come his way, he intended simply pray for a suffering person who had been brought before him,” Lombardi stated.
Read more?