Pope Francis will wash the feet of prisoners in a youth detention centre near Rome on Maundy Thursday. 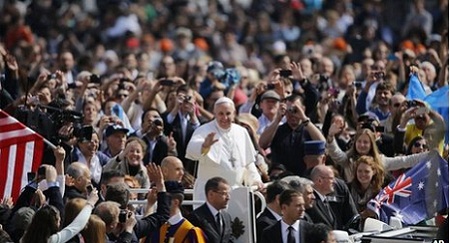 Pope Francis will wash the feet of prisoners in a youth detention centre near Rome on Maundy Thursday.

Thousands of pilgrims and tourists are arriving in Rome to attend ceremonies during the holy week ahead of Easter.
The washing of feet on the Thursday before Easter is a Christian tradition commemorating Christ’s Last Supper.
It is part of a papal calendar of events running up to Easter, the most important festival in the calendar of the Catholic Church.

The new leader of the world’s 1.2bn Roman Catholics has brought a new sense of simplicity to the Vatican, reports the BBC’s David Willey in Rome.
He has decided to live in a small suite in a residence for clerics, eating with other priests in a common dining room, after deciding not to move into the palatial apartments occupied by his predecessors in the Apostolic Palace.
He has again broken with tradition for the foot-washing ceremony, which is normally performed on lay people in one of Rome’s basilicas.
This time the Pope will visit the Casal del Marmo detention centre on the outskirts of Rome.
Read the full BBC News article here

The drama begins on the evening of the first day of the feast of Passover. Significantly, the Son was spending his last evening on earth by eating the Passover meal with his apostles in the large upper room of a friend?s home.
It seems that no servant was present, for there was no-one to wash their feet before the meal began ? and none of the apostles was humble enough to perform this menial task.
So Jesus put on a servant?s apron, poured water into a basin, and did what none of them had been willing to do. He then explained to the apostles that God?s love always expresses itself in humble service, and that the world would recognise them as his disciples only if they loved each other in a similar way.