In some of the most dangerous and restrictive countries in the world, Christians suffer interrogation, arrest and even death, for their faith. 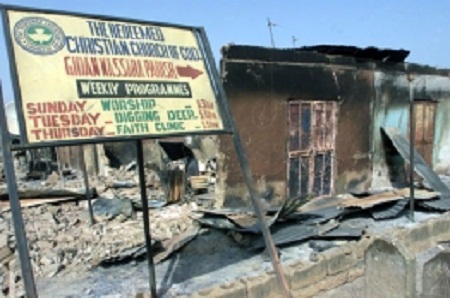 This file photo shows a sign pointing towards a church burned down by riots in northern Nigeria.

Persecution of Christians in Africa vastly increased in 2012, according to the Open Doors 2013 World Watch List of 50 countries where Christians face persecution for their faith.
Open Doors, an organization that supports persecuted Christians worldwide, states that this increase is mainly due to the increasing influence of Islam.
As three of its northern regions have fallen into the hands of ‘al-Qaeda in the Islamic Maghreb’ (AQIM) and its local allies, Mali is a newcomer on the list and holds the No. 7 position.
It is widely believed that these Islamist extremists are planning to kill all Christians in Mali.
Read more