Saturated by the Spirit of Grace 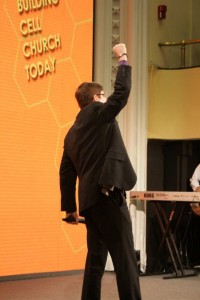 At the beginning of our venture into cell church, I looked at the shallow response so many people in our church were making to the challenge I presented. I realised we needed a generation of people who were saturated in the Spirit of grace. I began to preach grace in a much more emphatic way. Some cell leaders complained, ?Since you began to preach so much about grace?, they said, ?Our cell members have become lazy!? Can you guess how I responded to this? I preached grace even stronger than before. I preached grace, grace and still more grace! Do you understand why? It was because I knew the second part of Paul?s testimony.
Paul did not only give God glory because he had been saved and called to be an apostle, but he also gave God the credit for inspiring him and empowering him in his ministry. In effect he said, ?I am what I am by the grace of God?, and, ?I can do what I can do by the grace of God!?
Rightly understood, grace never produces lazy, fleshly Christians but workers, sold out for Jesus! Paul was so grateful for what Christ had done for him. His deep experience of the grace of God inspired and motivated him to live a life 100% dedicated to Christ. The same grace that saved him was now working dynamically in him, empowering him to labour tirelessly for the kingdom.
Grace teaches us – it shapes our lives – to be like Christ. Grace sets us free from sin?s power and directs us towards God?s holy glory. This is the motivation leaders must inspire in their members. Good workers for the kingdom of God are workers permanently infatuated by Christ. That?s why pressure tactics, guilt trips, blame games and naming and shaming people, never work in ministry. Manipulating people by these means cannot produce the kind of willing response that God requires of his people.
Serving God is an honour and a privilege that can only be enjoyed by true lovers of God. The rest is dull, legalistic and dead religion. In the gospel God says, ?Come as you are? while the church too often says, ?You are not acceptable until you change!?
The grace message states that God is looking for heart transformation, not behaviour modification. As long as we judge people from the outside, whether believers or unbelievers, we not only deny the gospel but we repel the very people the Spirit of grace is seeking to reach. God is looking for outrageous lovers and passionate warriors ? not religious lawyers and judges.
From the book, “People with a Passion”, by Colin Dye