Lance Armstrong resigns from board of Livestrong charity

Lance Armstrong has resigned as a board member of the cancer support charity Livestrong which he founded in 1997.?The 41-year-old stepped down, according to chairman Jeff Garvey, to “spare the organisation any negative effects surrounding his cycling career”. 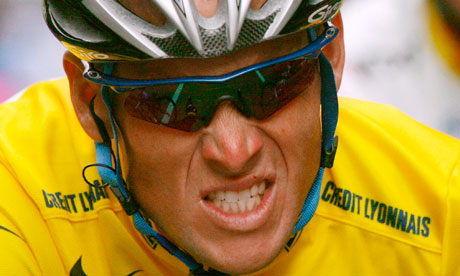 Lance Armstrong has resigned as a board member of the cancer support charity Livestrong which he founded in 1997.

Cycling’s governing body last month accepted an investigation’s findings of widespread doping in the sport.
As a result, Armstrong was stripped of his seven Tour de France titles and banned from cycling for life.
Source

It is sadly ironic that Lance Armstrong most famous quote would say this: ?”Pain is temporary. It may last a minute, or an hour, or a day, or a year, but eventually it will subside and something else will take its place. If I quit, however, it lasts forever.”
What wisdom should he draw from these words now? He has been forced to become a ?quitter? when he was seen as the ultimate champion. Would he now replace the word ?pain? for ?fame?? Fame lasting for a minute, when shame lasts forever?
What is left of Lance Armstrong? A seven times Tour de France winner, arguably the best cyclist of all times?
A mist, a vapour, an illusion?a life of victories that now amounts to nothing. He has been ?stripped of his titles?, stripped of his glory. He will be remembered as the worst cheater ever in the world of sports. A life of trophies, successes and fame collapses with a great crash. And now he is even forced to leave the charitable organisation he founded.
The story of Lance Armstrong reminds me of God?s judgment over our lives. God is gracious but His judgment is rather like a removal of his hand on us. If we continue to sin, deliberately, and choose to live our lives independently of Him, he is not forceful, and hand us over to ourselves.
Friends let me ask you the question: how do you live your life? How do you build? Are you a wise or a foolish builder? Hear the words of Jesus:
24 ?Therefore everyone who hears these words of mine and puts them into practice is like a wise man who built his house on the rock. 25 The rain came down, the streams rose, and the winds blew and beat against that house; yet it did not fall, because it had its foundation on the rock. 26 But everyone who hears these words of mine and does not put them into practice is like a foolish man who built his house on sand. 27 The rain came down, the streams rose, and the winds blew and beat against that house, and it fell with a great crash.?
Matthew 7:24-27
As in sports, the secrets of success in the race of faith are discipline and endurance. We must keep pushing forward no matter how hard or tough it gets. The prize is none other than Jesus himself, who is urging us forward, step by step, ever closer to the finish line where he is waiting for us.
But how do we run the race? Do we run in order to be praised for our works? Can we be likened to ?Spiritual Lance Armstrongs?, competing for an earthly price, triumphing on the outside but in reality deceiving everyone else?
God cannot be deceived, he cannot be mocked, one day we will stand before Him and give account for our lives. This day, there will be some surprises.
22 Many will say to me on that day, ?Lord, Lord, did we not prophesy in your name and in your name drive out demons and in your name perform many miracles?? 23 Then I will tell them plainly, ?I never knew you. Away from me, you evildoers!?
Matthew 7:22-23
Make sure that you build on the rock, that is Christ Himself, lest your works be burned like chaff.
10 ?By the grace God has given me, I laid a foundation as a wise builder, and someone else is building on it. But each one should build with care. 11 For no one can lay any foundation other than the one already laid, which is Jesus Christ. 12 If anyone builds on this foundation using gold, silver, costly stones, wood, hay or straw, 13 their work will be shown for what it is, because the Day will bring it to light. It will be revealed with fire, and the fire will test the quality of each person?s work. 14 If what has been built survives, the builder will receive a reward. 15 If it is burned up, the builder will suffer loss but yet will be saved?even though only as one escaping through the flames.?
1 Corinthians 3:10-15
What will remain of your works? Will you be stripped of your medals, of your trophies, like a shamed sportsman? Or will they be revealed by fire as pleasing to God?
I urge you today friends to strive for heavenly rewards. Examine your life and lay aside everything that is not built on the right foundation.
Jesus, as our forerunner has gone before us, enduring everything we have to endure ? and so much more. His race meant embracing the pain and the shame of the cross, and his prize was us, the redeemed people of God. He totally triumphed in his quest and has accomplished for us eternal salvation. As both the author and finisher of our faith, he guarantees us an entry into the grandstand of his glory ? heaven itself.
That should encourage us never to give in, fall back or disqualify ourselves from the race. We can draw from him the grace to help us in time of need and the assurance of faith that is solid evidence of the reality of the things we hold dear. This race of life is real; it puts us in touch with the truth of who Jesus is ? Jesus Christ, the same yesterday, today, and forever.