Austrian Felix Baumgartner has become the first skydiver to go faster than the speed of sound, reaching a maximum velocity of 833.9mph (1,342km/h).
In jumping out of a balloon 128,100ft (24 miles; 39km) above New Mexico, the 43-year-old also smashed the record for the highest ever freefall.

He said he almost aborted the dive because his helmet visor fogged up.
It took just under 10 minutes for him to descend. Only the last few thousand feet were negotiated by parachute.
Once down, he fell to his knees and raised his fists in triumph. Helicopter recovery teams were on hand moments later. 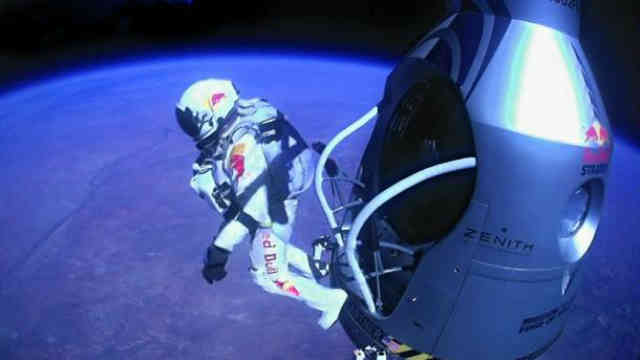 Baumgartner jumps and leaves his capsule for the highest freefall ever

“Let me tell you – when I was standing there on top of the world, you become so humble. You don’t think about breaking records anymore, you don’t think about gaining scientific data – the only thing that you want is to come back alive,” he said afterwards at a media conference.


I can only imagine how this man would have felt when he was literally on the edge of the world…amazing and humbling experience, reminding us of our frailty and of the greatness of God’s creation…