The Fire and the Rain

Elijah stood on top of Mount Carmel as the prophet of the Lord, His appointed representative to call the people back to God. He was about to demonstrate the lordship of God in the midst of the paganism and demonism gripping the land. 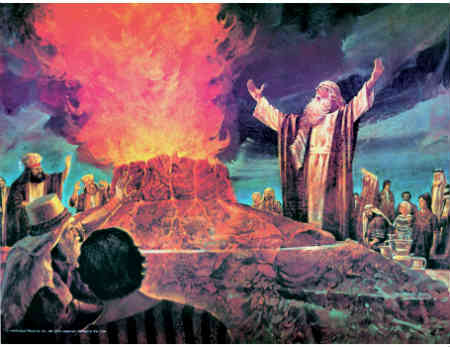 The three major sins of King Ahab had pulled the nation into even deeper darkness than his wicked predecessor, King Omri. 1 Kings 16 describes this downward spiral as Ahab encouraged the worship of the golden calves set up in Dan and Bethel by Jeroboam many years before.
He married Jezebel, the princess of Tyre who promoted the worship of Baal. She sponsored 400 prophets of Baal and 450 prophets of Asherah, the male and female gods of the pagan fertility religion and she persecuted the true prophets of the Lord.
Ahab allowed the re-building of Jericho, the first city Joshua had overthrown in the conquest of the land, even though God had forbidden it.
The three sins of Ahab show us the state of the nation of Israel in Elijah?s day. These were: impure worship, false religion and rejection of the Word of the Lord.
The golden calves Jeroboam set up in Dan and Bethel were designed to entice the northern worshippers away from the Jerusalem Temple situated in the Southern kingdom of Judah. But they also drew them away from the pure worship of the Lord. Soon their religion became a man-made substitute, an unholy mixture of worship of the Lord with idolatry and the pollution of paganism. The culture of the surrounding nations had penetrated the land of Israel and infected the people of God.


This paved the way for the resurgence of paganism in the form of Baal worship. It was the traditional religion of the Canaanites before the conquest and it was now given a particular Tyrian flavour as Jezebel became its ardent supporter and zealous benefactor. Flourishing alongside this fertility cult were gross forms of immorality, perversion, demon worship and witchcraft.
But the underlying cause of the backslidden state of Israel is epitomised in the re-building of Jericho. It demonstrated a lack of the fear of the Lord and a total disregard for His Word. Rejection of the Word of the Lord was at the root of it all. God had spoken through Joshua forbidding anyone from re-building the city and invoking a curse on anyone who disobeyed. Despite that, Ahab allowed Jericho to be built by Hiel of Bethel who did so at the cost of their firstborn son.
In the same way today, backsliding in modern Britain and Europe can be traced back to this same source of rejection of the Word of God. It begins with just a little mixing ? a little of what we want alongside our walk with God, a little bit of ?me? along with what God thinks, a little of my word, my will and my desire ? just a little turning away, nothing serious to begin with. But the foot is on the slippery slope and the slide begins.
Impure worship of the Lord sets in when we fail to let God take full control of our lives and resist His direction to become the true worshippers that Jesus said the Father seeks:
God is Spirit, and those who worship Him must worship in spirit and truth. John 4:24
But false worship of the true God leads inevitably to true worship of false gods. Once the ship has slipped its moorings it will be caught by the swell of human ideas, blown by the changing winds of human opinion and will surely founder on the rocks of false religion. Once the foundation slips the collapse of the whole building is only a matter of time. Once the Word of God is rejected, the rest is inevitable.
And this is the story of the Western world as it drifts away from God. Once strongly established on the foundation of God?s Word, we knew God and walked with Him. But now, we have abandoned these values and our Christian society is crumbling. The inherited greatness of modern Europe is a reflection of the glory that once shone from her ? the glory of God.

This is an excerpt from my book “Hearts on Fire” available on Amazon: