The Human Embryology and Fertilisation Bill made it lawful to manufacture human/animal hybrid embryos ? a blasphemous slight on the image of God in humanity, on the pretext of supposed medical cures perfectly attainable by other means. Parliament rejected a move to lower the upper limit of abortion from 24 to 22 weeks gestation despite medical advances in the treatment of premature babies, making nonsense of the supposed viability argument that brought in the Abortion Act of 1967. 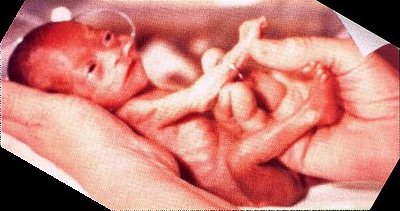 This is how a 21 weeks old embryo looks like…

In a new shift, Britain’s new health secretary insisted that there should be a reduction in the time limit for women who are considering getting an abortion. The remarks have already produced criticism from several women’s rights organizations.
Jeremy Hunt, who recently assumed his new role of health secretary, explained that while he understands the seriousness concerning this debate, he feels that reducing the time limit from 24-weeks to 12-weeks is the right point to start with when considering the moment life starts.
“Everyone looks at the evidence and comes to a view about when they think that moment is, and my own view is that 12 weeks is the right point for it ? It is just my view about that incredibly difficult question about the moment that we should deem life to start,” Hunt told The Sunday Times U.K. during an interview.


Not so long ago MPs voted to remove the statutory requirement to consider the need for a father (figure) in IVF treatment under the pretext of removing discrimination against lesbian women wanting children by this method. We can witness in the UK a desecration of human life and a breakdown of traditional family values.

The capacity of the gospel preached and received in the power of the Holy Spirit to change society is evident from Luke 10:17-20. When Jesus? disciples brought their reports back to him after having preached the gospel with signs and wonders Jesus testified, ?I saw Satan fall from like lightning from heaven?. The very spiritual atmosphere was changed.We are seeing the same thing begin to happen in the UK.

As God mobilises his gospel army, and brings in a new outpouring of signs and wonders, Satan?s powers are pushed back and the atmosphere is cleansed. Marvellous things can begin to happen. A nation can be changed by the gospel ? people?s lives turned around, families restored and institutions renewed. As new believers grow in discipleship and commitment their influence brings the kingdom of God into our society.