Perhaps the hottest issue currently under debate is that of gender orientation.?Contemporary idols like Lady Gaga have a powerful influence, not just in becoming the obsessional preoccupation of millions of teenagers (her smash hit ?Bad Romance? has had over 450 million views on YouTube ? one view for every 15 people on the planet), but also in shaping the aspirations and beliefs of a generation.

"No matter gay, straight or bi, lesbian, transgendered life?Ooh, there ain?t no other way, baby, I was born this way." Lady Gaga?s song ?Born this way? expresses the view that such persons were ?born that way? and can?t change.;

The real question that people are asking is, ?Are people born gay or do they choose to become gay?? It is the ?nature versus nurture? argument. People will argue that it is impossible for a person to change their basic sexual orientation and that we have no right to expect them to do so. One book that examines this subject very deeply and studies the medical, scientific facts ? not trying to make a case, but simply presenting the results of the studies that have been done ? says this: ?It is clear that although individuals differ in the strength of their impulses because of many variables ? some genetic, most not ? do not fully account for activity, homosexual activity included.? 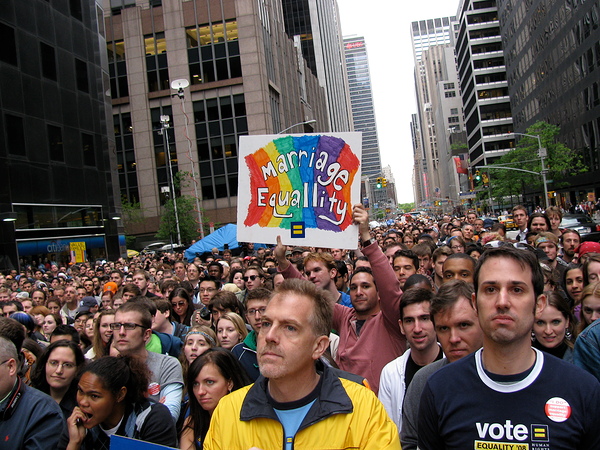 In other words, science tells us that whilst there may be some forms of genetic bias, genetic tendency or predisposition (there may be ? it?s not proven), there is absolutely no proof whatsoever that a person is born gay. That kind of evidence is utterly and completely missing. Yet I could take you to the popular bookshelves of our stores and show you books that categorically say the opposite. One book makes the statement, ?People are born gay in the same way that some people are born with blue eyes and others with brown eyes.? Quite simply, they are lying. Being ?born gay? is not established as a fact and this is something that the aggressive homosexual lobby is determined to keep from the public through so-called political correctness. This kind of popular opinion is fuelled by the media who have reported on dubious studies that claim to find homosexuality to be genetic, or as Time magazine once put it, ?Born gay?. But there?s no such thing as the ?gay gene?. 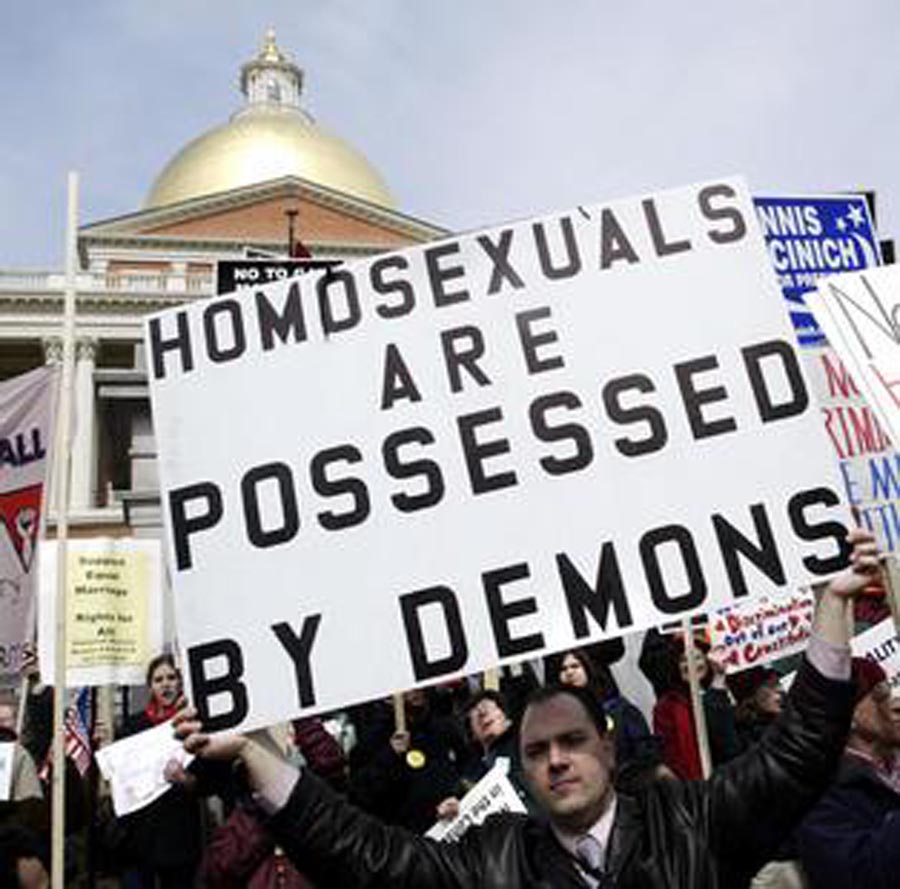 Gay marriage opponent Leonard Gendron, a local pastor, holds a sign reading "Homosexuals are Possessed by Demons" outside the Massachusetts State House in Boston March 11, 2004 where the Massachusetts Legislature is debating an amendment to the state's constitution banning gay marriage. On November 11, 2003 the Massachusetts Supreme Judicial Court ruled that the state must issue marriage licenses to gay couples. REUTERS/Brian Snyder

The motivation behind identifying ?gayness? as genetic is simple: if it is genetic then it can no longer be determined to be a moral issue. After all, if it?s in your genes then you can?t help it, right? But, as another writer put it, ?We should see the fallacy in the claim that homosexuality is not immoral because it is (supposedly) genetic ? [it] is certainly false as a scientific statement ?? And it is also a false conclusion to say, ?Science has proved homosexuality is right? because science has nothing to say about morality. You cannot prove by scientific means whether something is morally ?right? or ?wrong?.
Homosexuality is a complex human experience and none of it fits into a predetermined pattern. One thing that I find ridiculous is when Christians treat people who are struggling with issues of homosexuality as those who?ve simply decided to be gay ? as if one day they got out of bed in the morning and said, ?I?m going to be gay.? It doesn?t happen that way. There are always a complex set of circumstances that bring a person to that point. It does involve personal choice as well, of course, don?t mistake that; but apart from cases of rape or sexual abuse, homosexual acts are chosen, not forced upon others. And even in the cases where a person has been violated against their will that does not automatically mean the abused person becomes a homosexual. Homosexuality is far more complicated than that.
Many people speak of their homosexuality as always having been with them; they have been aware of an attraction to people of the same sex as long as they can remember. What factors might be contributing to this perception that people have? There are at least four:
1. Whilst science does not prove that people are born gay, there may be a predisposition towards gayness, in the same way that people who are very tall and athletic would be predisposed to becoming good basketball players. Whether they become what they are predisposed to however, depends on a whole range of other factors, it?s not simply due to their disposition; they need a motive and an opportunity to choose to go down that road. 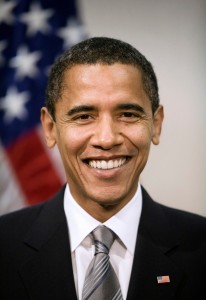 2. There may be a biological component in the mix of factors leading a person to have a homosexual inclination and hence, a homosexual lifestyle. One theory states that hormonal influences in the womb account for some ?feminine? characteristics in men and some ?masculine? characteristics in women. Some offer this as an explanation for homosexuality.
3. Others speak of psychological factors, either in infancy (such as in the theories of Freud) or in a person?s upbringing. One theory addresses the issue of a person?s psychosexual development. It states that the parent of the opposite sex to the person is particularly important in the early years of a child?s development, helping the child to gain a healthy view of the opposite sex for later in life. In adolescence however, it is said that the same sex parent is important for the discovery of your own sexual identity as a male or a female. If these relationships are not present or are dysfunctional during these critical years of development, then homosexuality can be the result. But nothing in these theories have ever proven that people are ?made? gay by their psychological or environmental history, although these may be strong influences.
4. There can be a misunderstanding about the basis of our freewill. We should understand that God has given us the dignity of freewill and that we are morally responsible human beings. This means that no matter what influences are upon us ? whether cultural, environmental, or biological ? they do not remove our right to choose our lifestyle or the freedom to live it out.

People who have homosexual tendencies are still people with the power of choice ? to live in one way or another. No one is forced to live in a certain way, but they choose to do so. No one has the right to judge another because of their sexual orientation or to take the view that they are better or worse than the next person. What is needed among believers today is love, humility and compassion to reach out to those who are struggling and offer help. Jesus can and will save all those who trust in Him, and He can also deliver us from the hold that sin has on our lives. This doesn?t mean that every sinful desire is removed, but the power of that sin is broken and can no longer have a hold over us.