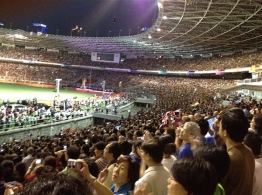 Indonesian Christians and international guests pray at the 80,000-seat Bung Karno Stadium in Jakarta, Indonesia, during the 2012 World Prayer Assembly, one of the largest evangelical events, on May 17,2012.(Photo" The Seed Company)

Friday concluded five days of prayer and discussion for more than 9,000 evangelical church leaders from over 60 countries who assembled in Jakarta, the capital of Indonesia, for the World Prayer Assembly (WPA), a grand Evangelical event that kicked off Monday after four years of preparations.
The WPA, believed to be the world’s largest Christian intercessory prayer event, reportedly received permission from the government of the predominantly Muslim country, and home to the world’s largest Muslim population, to invite Christians from countries like Pakistan, Afghanistan, India, Nigeria, Laos, Vietnam, Egypt, China, and even North Korea. The WPA events were held at the 11,000-seat Sentul International Convention Center in Jakarta and other venues.
Each day, participants were able to select from a dozen or more workshops and seminars addressing a variety of issues confronting the global church. All week, a 24-7 prayer room has been filled with people, sources said.
Thursday night, leaders were joined by other Indonesian Christians, all of whom together amounted to over 100,000, sources told CP, nearly making the 80,000-seat Bung Karno Stadium in Jakarta, where they assembled for a church service, burst at the seams. The evangelical leaders joined their prayers and minds to ponder the best ways of spreading the Gospel to the largest territory possible and instigate unity within Christianity itself, sources told The Christian Post.
“There is tremendous unity here. Even with such a diverse collection of leaders, there is an amazing sense of unity born out of a common humility and a recognition that God’s agenda is the only one we’re interested in,” Bill McCoy, Prayer Director at The Seed Company, who led some of the prayer sessions, told CP via email. “Psalm 133 comes to mind: when brothers dwell together in unity, there the Lord commands the blessing.”
source

Every revival of history has been birthed in prayer?and sustained by prayer. David Yonngi Cho, the pastor of the?world?s largest church in Seoul, Korea says that prayer is the?key to revival. All other revivals have lasted only a short time.?But the Korean Revival has been sustained down through the?years by the prayers of the Korean believers.

It is common?practice for churches in Korea to hold early morning prayer?meetings. Thousands gather daily around 5am and build an?atmosphere of revival through their praying.?And so it was for the church of Acts. Prayer was?paramount. From the beginning we can see that prayer is the?key.
The 120 met together in the upper room to pray and to?wait for the coming of the Spirit. They taught their converts to?continue steadfastly in prayer and they supported the great?public prayer events in the Temple. It was not just that they?went to the prayer meetings to say their prayers.
They?developed a life-style of prayer. Prayer was continuous. It was?part of them ? as natural as breathing. This kind of prayer is?both a cause and an effect of revival. Prayer brings revival?because prayer brings God. But also, revival brings prayer.?When God draws close He awakens in us a desire to pray.?Revival is a call to stir yourself up to pray, to seek the face?of God and to pour out your soul to Him. Samuel Chadwick?said, “There is no power like that of earnest, believing and?prevailing prayer”.
Prayer will give you strength for the battle,?it will keep you close to God in the time of trial and will?protect you from the onslaughts of the enemy. That was the?experience of Peter and John as they went back to their?people to report what had happened during their arrest and?trial at the hands of the Sanhedrin.?As soon as they heard an account of the events, the?believers rose up in prayer. It was their first and most natural?response. They were passionate about their contact with God?through prayer and so they prayed with one accord lifting up?their voice to God (Acts 4:24).
They prayed fervently as if the?very destiny of their city depended on it. They prayed in unity,?their many voices becoming ?one voice? before the Lord.?How the Church needs to respond like that today! Instead?of prioritising prayer many churches hold committee?meetings. In times of crisis, they get in touch with their?political representatives and try in every way possible to?manage in their own strength or wisdom. But the believers of?Acts lifted up their voice to God. That?s real evidence of?revival.
And that?s why the power of Pentecost remained with?them. They were still in one place, still of one accord and still?praying! Wherever you find people praying like that you find?revival. God wants us learn to pray like that ? with unity of?purpose, with persistence and with desperation.?It is clear that these were a desperate people, but their?desperation was not due to their adverse circumstances. They?were in danger and they knew it. But their real concern was?not for themselves. They were desperate for God ? to see Him?act, and knowing His purpose, they wanted to see it fulfilled.
They had a single eye for the glory of God and longed to see?Jerusalem saved.?Revival is born out of such desperation. When we know?that there is nothing we can do but cry out to God from the?depth of our being, and when our hearts are ablaze with?spiritual passion to see the lost saved and Christ magnified?having no thought to ourselves, then revival will come. It?s?time to carry that fire in our hearts, to be desperate for God?to come.

“For the earth will be filled with the knowledge of the glory of the LORD, as the waters cover the sea.” Habbakuk 2.14