Amazing to see that God is moving powerfully in Indonesia, a country predominantly Muslim. Praise God!

JAKARTA, Indonesia — Thousands of the world’s Christian leaders are in Indonesia seeking God’s guidance on how to transform the nations with Christ’s message of love.
It’s an historic prayer gathering in many ways, not the least of which is Indonesia’s decision to host the event. The huge Southeast Asian island nation is home to the world’s largest Muslim population.
“That’s what we are well known for, but there’s something else taking place in our country,” one Indonesian woman said.
Her words echo a deep desire among Indonesia’s minority Christians to make the name of Jesus Christ famous.
“We are a small percentage of the population, but we are compelled to tell others about Christ,” the woman said.
Winds of Revival
A massive prayer movement is underway, connecting some 500 Indonesian cities with more than 5 million believers.
This week, an hour’s drive south of Jakarta, the capital city, Indonesian churches invited more than 9,000 Christians to take part in the World Prayer Assembly 2012.
“We feel that the epicenter of the world revival is going to be Asia and especially Indonesia,” World Prayer Assembly’s John Robb told CBN News.
Such a large Christian event has never been held in this majority Muslim country.
“We see the WPA as kind of a stepping stone toward the fulfillment of Habakkuk 2:14: ‘For the earth will be filled with the knowledge of the glory of the Lord as the waters cover the sea,'” Robb said.
For five days, representatives of more than 60 countries will network and strategize on how to bring Christ’s salvation and healing to the nations.
“A new wave is coming so we wanted to catch it, the spirit of prayer, so that we can bring revival to our nation,” Pricilla Abbathurai of India said.
“I’ve been praying that I would be a part (of) what God is doing in my country and for the whole world as we fulfill the Great Commission,” Philippines resident Julius Velasco said.
“My prayer for this Congress is that this movement of prayer, this movement of mission will be joined together to see the Great Commission accomplished in the coming decades,” American Paul Eshlemen said.
Organizers say worship and intercession will serve as the cornerstone for all the week’s activities.
Throughout Indonesia some 1.5 million believers have committed to praying this entire week, and about 300 cities are joining together with all of their focus and prayer right here outside Jakarta.
The highlight of the gathering comes Thursday, when an estimated 100,000 Christians are expected to fill Indonesia’s largest stadium with several more hours of worship and prayer for the nations.
source 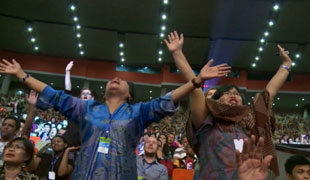