"Victims of deadly Swiss coach crash mourned", where was God in all this? 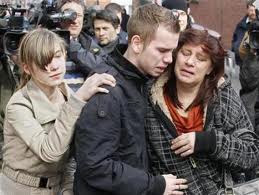 Belgium is mourning the deaths of 28 people – 22 of them children – in a coach crash in Switzerland.?The coach, carrying 52 people back to Belgium following a skiing trip, struck a wall in a tunnel on Tuesday.?Relatives of the victims have flown to Switzerland – with many unsure about the fate of their children.
King Albert said his thoughts “go out to the victims and their families”. Investigators say there is no indication that the bus was speeding.?None of the parents [at Lommel school] knows what has happened exactly, if their child has been affected or not?
The bus crashed shortly after 21:00 (20:00 GMT) on Tuesday near Sierre, in the Swiss canton of Valais, close to the border with Italy.?The Belgian foreign ministry said most of the children were aged around 12, and the bus was one of three hired by a Christian group. The other two reached Belgium safely.
The children had spent a week skiing in Val d’Anniviers in the Swiss Alps.?Those on board the bus that crashed were from the Stekske primary school in Lommel, near the Dutch border, and from St Lambertus in Heverlee, near Leuven, with the numbers roughly even.
Although most of the victims are Belgian, Swiss officials say the dead include seven Dutch children. Among those injured are three Dutch, one Pole and one German.?The 24 injured have been taken to hospitals in Sion, Bern and Lausanne. Officials say three were in a coma.
source 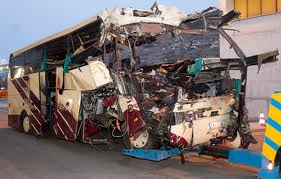 Where was God in all this?
“We mourn with those who mourn” ?Romans 12.15
One of the hardest problems to grapple with as believers is the problem of evil. How can a good God who is all powerful allow suffering to come into the world? It is an important question and one that often stumbles many thinking people. We can talk about free will and God?s overall control of everything. We know that ?all things work together for good?. But, in the final analysis, the Bible never fully answers the question of suffering. Why do millions die every year from natural disasters, war and famine? Why do bad things happen to good people? Why did this children have to die in an horrific crash?
We mourn with those who mourn and pray for all the families who have suffered a terrible loss. I have experienced in my own life ?an intense time of learning about healing and pain, of discovering what it means to follow the healing Christ in our hurting world. My immature understanding of healing had to move on from miracles to include wholeness. I needed to find the therapy of God?s peace and to appreciate, then appropriate, the absolute certainty of the eternal heavenly healing before us. I had to grasp and learn how to handle the twin realities of God?s willingness to heal and the abiding presence of pain.
God does not satisfy our intellectual curiosity, at least not to the extent that some philosophers and atheists demand that he should. Why not? Honestly, I don?t know. But I do know that God has done something infinitely more wonderful. His response to the problem of evil is to come himself. Not just to observe it, but to experience it. The rejection, sufferings and death of Jesus on the cross should put an end to all our fruitless debating and theorizing. God in Christ has fully indentified with our life on earth. He has experienced what we experience because he has lived what we live ? in every way apart from sin.