What causes a curse? 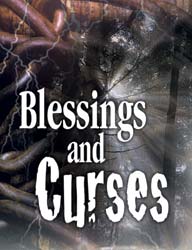 Curses arise when people use the enemy’s weapons – hatred, negative speaking, a desire to harm. However the enemy cannot work through it unless there’s a good reason for the curse.

The Bible is also clear about those sins which prompted God to curse Israel:

Although God does not curse us automatically every time we sin, we will want to please Him by avoiding these sins.

All curses were destroyed at the cross. They lost their power over you when you came in repentance and faith to Christ. When the chastening hand of God touches your life, you can repent and quickly find freedom. God will renew you, and restore you to Himself.

Some curses, however, are enforced by demons: and we need the Spirit’s discernment to recognise them. It doesn’t honour God when believers start delving unnecessarily into their pasts to look for evil influences. God has set you free in Christ, and this freedom is complete.

But the Spirit may show you that there’s something in your life, which is the result of a demonically- enforced curse. If this is so, you’ll need to stand in your freedom in Christ, and enforce this against the activity of the enemy.

There are several evidences, which point to the existence of demonically enforced curses. These normally operate in several members of a family or a group, and are often found over several generations. They are persistent problems, which defy medical analysis or treatment. And they seem to take on supernatural characteristics – they are not just natural events or a series of coincidences. There will normally be a whole pattern of events, not just one isolated occurrence. Experience suggests that the following are signs that can point to the existence of a demonically enforced curse:

Repeated suicide attempts in many generations.

Repeated miscarriages, or unusual difficulties at menstruation or menopause.

A highly improbable rate of accidents.

Continual and unnatural levels of debt and inability to make ends meet, particularly when there’s no adequate explanation for this.

Please don’t go looking for these things in a negative or morbid way. You must submit yourself completely to the leading of the Spirit, and then check your thoughts with a wise and experienced leader. It’s best to wait until there are several evidences before even considering the possibility of a demonically-enforced curse.

If you really do suspect a curse, make sure that you check very carefully. Verify facts wherever possible. Don’t jump to conclusions. And never doubt the power of the Holy Spirit to set people free!

When dealing with your enemy, the devil you must never underestimate his power and influence and never exaggerate his role. The devil is a formidable enemy. He’s powerful, but he’s also defeated! Some believers seem to feel the devil’s influence everywhere but it is much better to be super-sensitive to Jesus’ presence! You have nothing to fear from the devil when you’re walking with Jesus Christ.

In Numbers 22-24 we can read about Balaam and Balak. It is an important story, which reveals much about the spiritual principles of cursing and blessing.

Balak, the king of the Moabites, was worried because the people of Israel had camped on his borders. He knew that the Israelites were too strong for his army to defeat, so he sent for Balaam to curse Israel so that the Moabites could defeat them in battle. (Numbers 22:1-21)

Balaam tried to curse the people of God, and the Lord wouldn’t allow it! Three times, he tried to curse Israel; and, four times, a blessing came out of his mouth! (Numbers 23:8-9, 20, 24:10) This made King Balak very angry. Balaam, however, knew the spiritual principle that nobody can curse those whom God has blessed. “How shall I curse whom God has not cursed? And how shall I denounce whom the Lord has not denounced?” (Numbers 23:8)

Israel’s protection came from the Lord, it was His blessing which kept them safe. They were “set apart’, and God was with them. Balaam knew that under the Old Covenant, they were safe while they walked in obedience to the Lord. “He has not observed iniquity in Jacob, Nor has he seen wickedness in Israel. The Lord his God is with him, and the shout of a King is among them.” (Numbers 23:21)

It was clear to Balaam that he could curse them only if they disobeyed God and moved away from the safety of His blessing. In Numbers 25 we read that the men of Israel began to commit harlotry with the women of Moab. This led them to start participating in pagan sacrifices and worshipping the Moabite god. Few people link this to Balaam, but if you read Numbers 31 you can see that he counselled the Moabite women to seduce the Israelite men and cause them to sin against the Lord. God’s anger was aroused, and He judged His people with a plague, which killed 24,000 men and women. God’s judgement was lifted only after all those who’d committed idolatry had been killed.

The story of Balaam is still relevant. In Revelation 2:12-17, John records the message of Jesus to the church in Pergamos. Especially about the way that they had compromised. “I have a few things against you, because you have there those who hold the doctrine of Balaam, who taught Balak to put a stumbling block before the children of Israel, to eat things sacrificed to idols, and to commit sexual immorality.” (Revelation 2:14)

Jesus gives them a very clear warning: “Repent, or else I will come to you quickly and will fight against them with the sword of My mouth.” (Revelation 2:16)

God still takes sin and disobedience very seriously. There can be no place for compromise in your walk with the Lord. You are living dangerously when you disobey God deliberately. The Holy Spirit can lift His protection and expose you to the loving judgement of God. You will not be at risk of eternal separation from God, but you will miss many of God’s blessings – both on earth and in heaven. You may then experience the Lord’s gracious chastening, which He sends to restore us to Him.

If you do sin, confess it to Him and repent, He is faithful and just to forgive your sin and cleanse you from all unrighteousness. The devil is a defeated enemy. Neither he, nor any of his demons, can plant a curse where there’s no just cause.