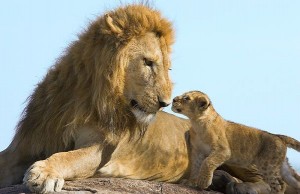 Fatherhood lies at the heart of the Christian faith. Jesus fully and uniquely revealed the nature of God as Father:
No one has seen God at any time. The only begotten Son, who is in the bosom of the Father, He has declared Him. John 1:18

This is so familiar to us as Christians that we often fail to grasp just how unique this message is and the radical impact it can have upon people’s lives. The angels are called “sons of God’ in the Bible, and Satan (originally Lucifer) was one of them. This means that Satan who is in a broken relationship with his father, has now become the son of rebellion and archetype of all anti- Father behaviour. That’s what makes Jesus’ sonship so important. Jesus is the Son of God, not by birth or creation, but by virtue of his eternal co-existence with God sharing and expressing the very nature of God himself. God is an Eternal Father, because he has an Eternal Son. Jesus came into the world to share, show and affirm the Father’s love. Everything he did and said demonstrated that. He revealed the Father’s heart, and confirmed the Father’s commitment to us all.
The devil, being in perpetual rebellion to God sets his face against God as Father and every trace of fatherhood that originates from him. We see his work in families where father is most likely to be absent, or abusive, or passive, making it hard for people to understand that God is none of these things – quite the reverse. But Jesus came to show that God is ever-present, always-loving and totally for his children.
Have you ever taken that in – I mean really grasped its significance? God, the supreme, exalted and totally transcendent One, the Maker and Master of the universe is your father – and he is never absent from you for one moment. He is always there, protecting, affirming and chastening you in the strength of his love. And, above all, he is for you.
We find that hard to believe for a number of reasons. First, a positive experience of fatherhood is often missing from our lives. Then, there is a sense of guilt coming from our own evident shortcomings which leads us to fear that God is angry with us and actually working against us in all things. And finally, we have to contend with the devil’s hatred of the Father and his constant slandering of God’s character tempting us to doubt the Father’s love.
But the radical revelation of Christ to us is this: God is for us, not against us and has made full provision for our sin and failure. He is working for us, not against us and had our best interests at heart. He calls us to respond to him as his sons and daughters, to delight in his love and to find the joy of serving him as our Father. This is the only way to true healing and restoration. Let the Holy Spirit lead you deeper into that love.