Mild He lays His glory by Born that man no more may die Born to raise the sons of earth Born to give them second birth Hark! The herald angels sing “Glory to the newborn King!” 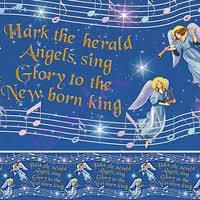 Christmas is a glorious celebration of new birth. The famous carol Hark! the Herald Angels Sing celebrates not only the birth of Christ but also the second birth that takes place when we have true faith in Him. Christ was born to give us a second spiritual birth and without the second birth we cannot enter in to the kingdom of God. Someone once asked me if I was one of those ‘Born Again’ Christians and I replied that there is no other kind of Christian than the born again kind! What is Christmas all about? The Christmas story is not about religious organisations, church laws, services and rites, nor is about human efforts to please God. Neither is Christmas about presents, retail targets, family gatherings and holidays. The Christmas story is all about the supernatural grace that comes to us through the virgin birth of the only Son of God. The second verse of this carol, written by Charles Wesley, explains the incredible truth of the Christmas story which is all about incarnation – that in Christ, God became man.
Christ by highest heaven adored Christ the everlasting Lord Late in time behold Him come Offspring of a Virgin’s womb Veiled in flesh the Godhead see Hail the incarnate Deity Pleased as man with man to dwell Jesus, our Emmanuel Hark! The herald angels sing “Glory to the newborn King!”

Why was Jesus born?

Jesus was born for a mission; he didn’t stay in the cradle. He was born to die on the cross for the sins of the world. Little baby Jesus would grow to become the berated, battered, and bruised Messiah, taking the punishment that we deserve so that by faith in him we can have peace with God. In this carol Wesley gives us three reasons why Jesus was born.

Born that man no more may die

Just as Jesus taught about two births – one physical and one spiritual – so there are two deaths that are taught in the New Testament, and again one is physical and one spiritual. God never intended man to die and it was, in fact, Adam who brought death into the world and not God. When Adam rebelled against God he fell from grace and took the whole world down with him. His sin brought both physical and spiritual death to all mankind. No matter how long a person lives they will eventually die physically, but the Bible also declares that physical death is not the end, there is also a second spiritual death or conscious eternal punishment that waits for all who die in their sins.
Christ was born to conquer with the greatest enemy to Mankind – death! Christ was born of a virgin and he was born free from Adam’s sin. Jesus lived the perfect life, and he did it all for us. He was born for us, he lived for us, he died for us and he was raised from the dead for us. On the cross Christ died physically and spiritually carrying all the punishment due to the world. Now whoever believes in him shall never taste spiritual death.

Born to raise the sons of earth

Without Jesus we are spiritually dead and in our sins, “And you who were dead in trespasses and sins” (Ephesians 2:1). But the moment we believe the gospel we are spiritually raised from the dead; we are born again. “But God who is rich in mercy because of His great love with which He loved us, even when we were dead in trespasses made us alive together with Christ (by grace you have been saved) and raised us up together … with Christ.” (Ephesians 2:4-6).
We are now no longer spiritually dead and will not taste spiritual death after we die. But Jesus died physically too and on the third day His body was raised from the dead. At the centre of the Christian faith is the truth of the physical bodily resurrection of Christ. Because Jesus was raised from the dead we know that when the believer dies and goes to heaven he will also be reunited with his body on the day of resurrection when Christ returns. We have been raised spiritually and one day we shall also be raised physically. Jesus Christ was born to give us resurrection.

Born to give them second birth

Jesus said to Nicodemus “Most assuredly, I say to you, unless one is born again he cannot see the kingdom of God” (John3:3). Jesus was born to give us a second birth that is spiritual in nature and necessary for salvation, indeed He said that we must be born again.
When you become born again you receive a totally new nature, you are a new creation and the old person you were has passed away. You are born again into a totally new realm of grace and have been delivered from the realm of Sin, Satan and condemnation. Your life now consists in discovering the liberty and freedom of being born again and inviting others to also receive newness of life. As you celebrate the birth of Christ this Christmas make sure you are born again, and if you are already then celebrate the fact that his birth was to give you new birth. Now is it any wonder the herald Angels sang! Hark then to their message. Hark! the Herald Angels Sing is one of the more than 6,500 hymns from the pen of Charles Wesley that have enriched Christian hymnody. It is thought to have been written one year after his dramatic, Aldersgate conversion experience of 1738 and is generally considered to be one of Wesley’s finest.
According to John Julian, noted hymnologist, this is one of the four most popular hymns in the English language. It certainly has become one of the classic Christmas carols and is sung thousands of times every year all around the world.
You can listen to the song in the video below