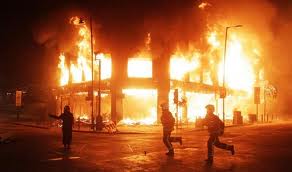 Ugly scenes of violence, rioting and looting have spread across the length and breadth of the capital

A spirit of lawlessness has broken out over London. Following the protest last Saturday by the family and friends of a suspected gang member killed by police, violence, looting and arson has spread across the city. I spent last night guarding my property situated 500 meters from one of West London?s flash points. Similar scenes were witnessed in Birmingham and Liverpool.
Residents, shop keepers and London?s general population have been gripped with fear. Police and government officials are working out how they can reinstate law and order. Simultaneously, community workers, media analysts and social commentators are presenting their take on the root cause of this lawless vandalism.
Some point to the disaffection of London?s youth and the alienation of certain sections of the community. Despite the unprecedented scale and intensity of the criminality some are blaming the police for their failure to maintain order and to protect the public. Others are saying that the root cause is poverty, unemployment and general social deprivation. The Coalition Government?s cut backs are the root cause, according to those eager to discredit their economic policies.
Labels are flying about – ?sheer criminality?, ?thuggery?, ?wanton destruction? – as the Home Secretary vows that all offenders shall be brought to justice. Evidence points to a level of organized action on the part of the looters. Gangs were apparently working to a strategy to create confusion and to overwhelm areas with large numbers of looters knowing that simultaneously the same things were happening in many places across London. Despite the 6,000 police officers on the streets last night many of the raiders had a free hand for up to 2 hours. Twitter and Blackberry Messenger networks, used to such good effect in the Arab uprising in Tunisia and Egypt are now being used to direct looters to the places they can attack with impunity.
As a minister of the gospel, I am appalled. The London I love and serve is being destroyed. But my biggest concern is that our leaders do not have a handle on the real source of this outburst of lawlessness. The problem will not be solved by political or social action alone. Neither will the problem go away simply by stepping up robust policing in the troubled areas. The problem at root is spiritual. Lawlessness as well as being part of fallen human nature is a spirit.
The further our society drifts from spiritual values, those values found in the Christian gospel, the more the constraints on people?s behaviour will be removed. The culture of ?me-ism? will continue to influence people?s actions. Every opportunity will be taken for people to grab what they can and blame someone else.
The gospel stresses personal responsibility and self-discipline for the good of others. It shows people the way to deal with lawlessness and to love others with the love God has shown us. When will our society turn back to the only solution?