A vision for the Lost, by William Booth

On a recent journey I found myself thinking about the multitudes around me. They were living carelessly in the most open and shameless rebellion against God, without a thought for their eternal welfare. As I looked out of the coach window, I seemed to see them all … millions of people given up to their drink, pleasure, dancing and their music, their business, anxieties, politics and troubles. Ignorant – wilfully ignorant in many cases – and in other instances knowing all about the truth and not caring at all. Suddenly, as I thought about them I had a vision.

In it I saw a dark and stormy ocean over which black clouds hung heavily. Every now and then vivid lightening flashed and loud thunder rolled, while the winds drove foaming waves into a tempest that was claiming lives. There were myriad’s cursing, struggling and drowning, and as I watched some of them sank to rise no more.

The rock of safety

Then I noticed a mighty rock that rose up out of the dark angry ocean. Its summit towered high above the platform. Onto this platform, I saw with delight that a number of the poor struggling wretches were continually climbing out of the angry ocean. And I saw a few of those who were already safe on the platform helping others onto the rock. Many were working with ladders, ropes and boats to rescue those who were drowning. Occasionally someone actually jumped into the water, regardless of the consequences in their passion to “rescue the perishing”.

I hardly know which sight delighted me more – the sight of the people rescued, or the devotion and self-sacrifice of those had who rescued them.

Looking more closely, I realised that the people on the platform were quite a mixed company. They occupied themselves in different ways. Some spent their days trading while others amused themselves by dressing up for the admiration of their peers. Many were chiefly concerned with eating and drinking and yet others were taken up with arguing about the people that had already been rescued. Only very few of them made it their business to rescue people from the sea.

What puzzled me most was the fact that although all of them had been rescued from the ocean at one time or other, nearly everyone seemed to have forgotten about it. And what seemed equally strange was that they did not even seem to care about the people who were drowning right before their eyes – many of whom were their own spouses, brothers and sisters and even their own children.

Those on the rock had received a call from the one who had Himself gone down into the sea. They’d heard His voice and felt that they ought to obey it – or at least so they said. They professed to love Him and to sympathise with Him in the task He had undertaken. But, they were so distracted by their professions, pleasures and their preparation for going to the mainland that they did not help Him. So the multitude went on right before them struggling, shrieking and drowning in the darkness.

And then I noticed that some of the people on the platform were crying out to Him to come to them! Many wanted Him to spend His time and strength in making them happier. Others wanted Him to take away various doubts and misgivings they had concerning the truth of some letters He had written to them. Some wanted Him to make them feel more secure on the rock -so secure that they would be quite sure that they would never slip off again into the ocean.

So they would meet and climbing high on the rock they would cry, “Come to us! Come and help us!” And all the while He was down among those drowning in the sea trying to rescue them and looking to those on the rock for help. 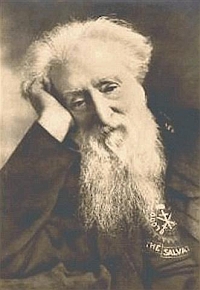 William Booth was the founder of the Salvation Army

And then I understood it all. The sea was the ocean of human existence. The lightening was the piercing truth coming from Jehovah’s Throne. The thunder was the distant echoing of God’s wrath. The multitudes struggling in the stormy sea were ‘the Lost’, ungodly people of every kindred, tongue and nation. That great sheltering rock represented Calvary, the place where Jesus had died for them. And the people on it were those who had been rescued. The way they used their energies, gifts and time represented the occupations and amusements of those who had been saved. The handful of determined ones that risked their lives to save the perishing were the true soldiers of the cross. The One calling on the rescued to help Him rescue others was Jesus Himself.

A time to act

Fellow Christians, you have been rescued from the waters, yet He is still in the sea calling for your help. Don’t be deceived by appearances – men and things are not what they seem. All who are not on the rock are in the sea!

Jesus is in the midst of this dying multitude, struggling to save them. He wants you to jump in and help. Will you jump or will you linger on the bank, singing and praying about perishing souls? Lay aside your shame and pride, your cares about the opinions of others and all the selfish loves that have held you back for so long, and rush to the rescue of these dying men and women.

Unquestionably the surging sea is dark and dangerous. The leap means difficulty, scorn and suffering for everyone who takes it. Yet He who beckons you from the sea knows what it will mean – and knowing, He still bids to you to come.

You have enjoyed your Christianity long enough. Going down among the perishing crowds is your duty. From now on your ease will depend on sharing their pain and your heaven in going into the very jaws of hell to rescue them. Now what will you do?